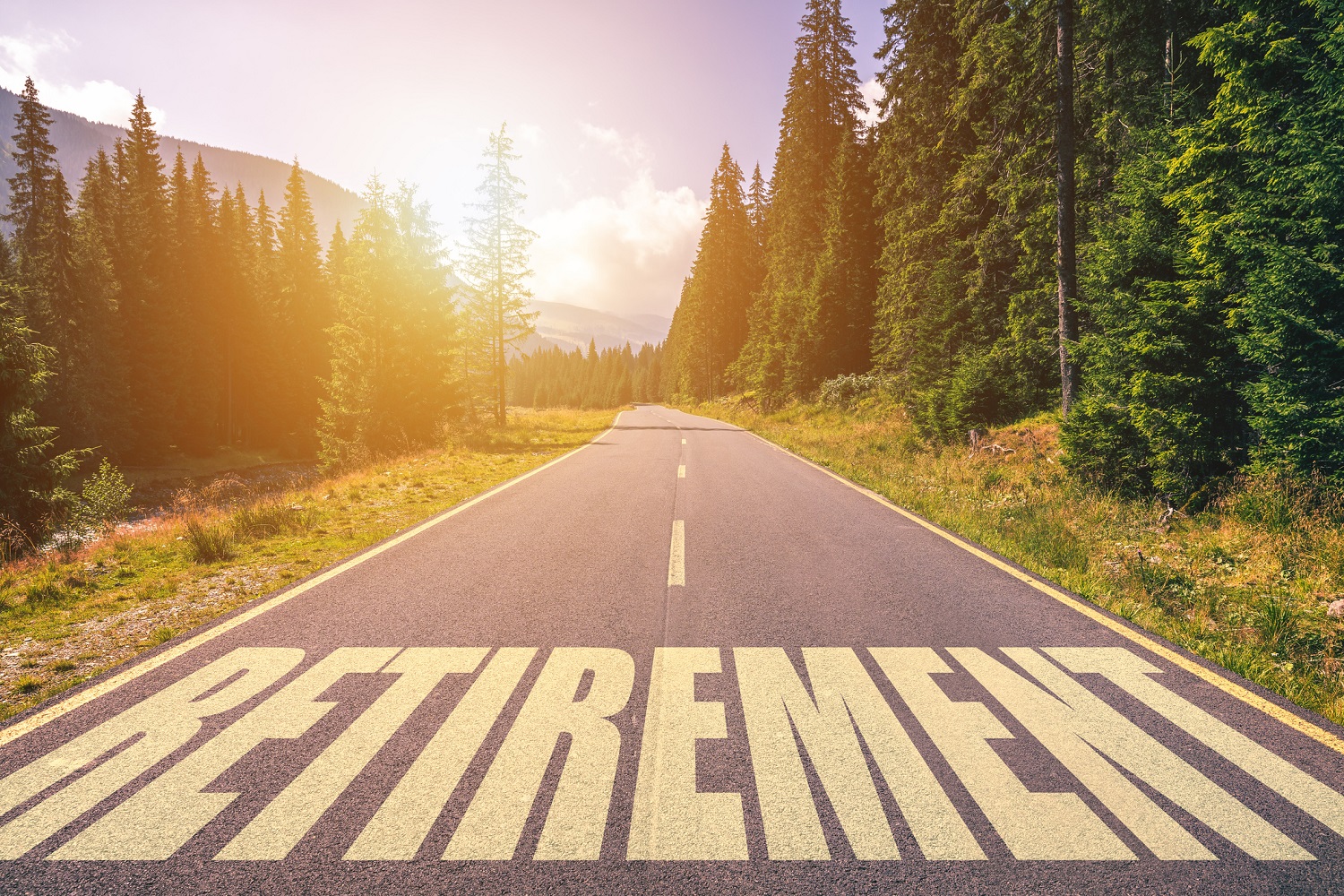 One of the most severe problems faced by the developed economies of the old continent and North America is that of their pension systems’ sustainability. Preserving their demographic and macroeconomic aggregates on current levels as well as keeping the existing pension legislation will mean that the majority of pensioners will live below the poverty line.

The two main issues contributing to the retirement crisis are the drop in birth rates and the increase in life expectancy.

In 1950, the total fertility rate was 5 children per woman whereas today this rate has gone down to half. Determining factors for this decrease were the introduction of birth control in populous China and India, industrialization – urbanization and the introduction of contraception methods combined with the reduction of illiteracy. Table 1 shows the decrease in the fertility rate in several countries around the world during the last three decades. Despite the overall universal decrease (with France being the sole exception), the great developing industrial powers of Brazil, India, Turkey, Mexico, and China have higher fertility rates than the majority of western countries. 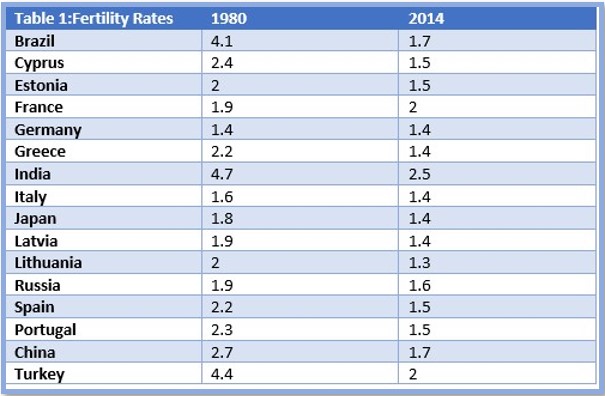 The second pillar of the issue is the significant extension of life expectancy on a global level, which is mainly due to the improvement of technology, the restriction of poverty-related factors and the discovery of new medical methods and treatments. To be more specific, the average life expectancy in developed countries has gone up from 67 years in 1960 to 78 years in 2015, while in the world, in general, this number has risen from 45 to 69 years for the same period. Table 2 shows this increase for selected countries. The United Nations Statistics Division predicts that the world percentage of people over 65 will go up from 5% in 2010 to 12% of the total population in 2050. The Global Entrepreneurship and Development Institute predicts that in developed countries the working population aged 15 – 59 will have a 15% decrease by 2040. 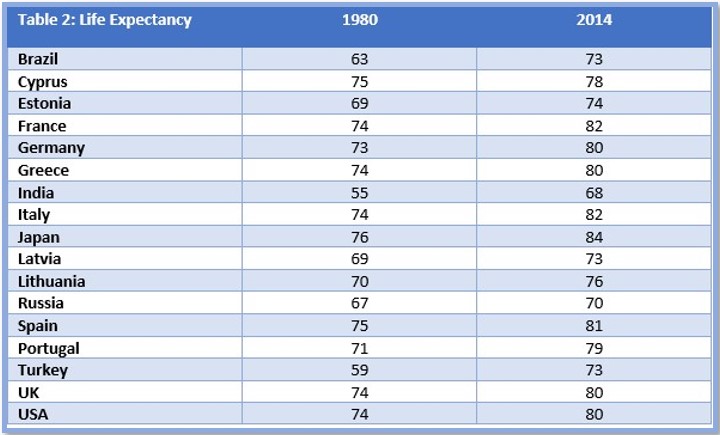 The total effect of demographic factors on the retirement crisis is reflected in the age dependency ratio. This ratio is the number of dependents to the number of the working-age population (15-64 years old). As Table 3 shows, with the sole exception of Japan which faces a major aging population problem, all the other countries have managed to significantly reduce this proportion in the last 33 years. The improvement is due to the fact that the decline in birth rates and the mass integration of women into the workforce have managed to balance out the negative effects of increased life expectancy.

Given that in developed countries the integration of women into the workforce has reached its peak, we have to expect a deterioration of the ratio. 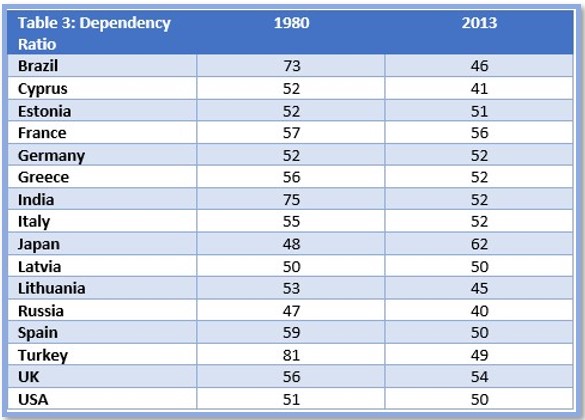 Apart from demographic factors, however, the problem is aggravated because of the long-term macroeconomic policies of developed countries. The end of World War II in Europe and the USA brought about an overwhelming effort to create a social state as defined by the then-groundbreaking ideas of Keynesianism. The state took over the role of both investor and employer, aiming to create job positions in the war-torn economies. At the same time, a social network to protect vulnerable groups (unemployed, pensioners, low-income workers, etc.) was created while trade unions found fertile ground to promote the rights of the working class.

This period is to call the Post-War economic boom in the western world. Despite its temporary pause in 1970 because of an oil and currency crisis, the economic boom continued up until the beginning of the 21st century. The time period we are in now is characterized by the fall of the unilateral system in the global economy. With the full liberalization of world trade as the ultimate goal in a new globalized world, both Asian powers (Russia, China, India, Vietnam, Turkey) and countries of the southern hemisphere (Brazil, Mexico, Argentina, South Africa) constitute a challenge to the monopoly of the western world. With their particularly competitive industry, these countries are claiming a place for their products in consumers’ baskets around the world. In the competitive environment that they are promoting through the World Trade Organization, both Europe and the USA currently find themselves at a dead-end as they will have to push for a decrease in the high cost of their workforce. Postponing that decision has caused the public debt to soar in the last fifty years, as can be seen in the graph below:

The amassing of debt by western societies cannot continue ad infinitum. The state will be contained while its social character will be restricted. Pensions belong to the non-productive part of the state budget and it should be expected that they will be targeted.

The ongoing debt crisis in Southern Europe has further worsened the public debt situation of western economies. The seriousness of this can be seen in Table 4. The only country out of the selected ones that have managed to keep its public debt stable during the financial crisis in China. 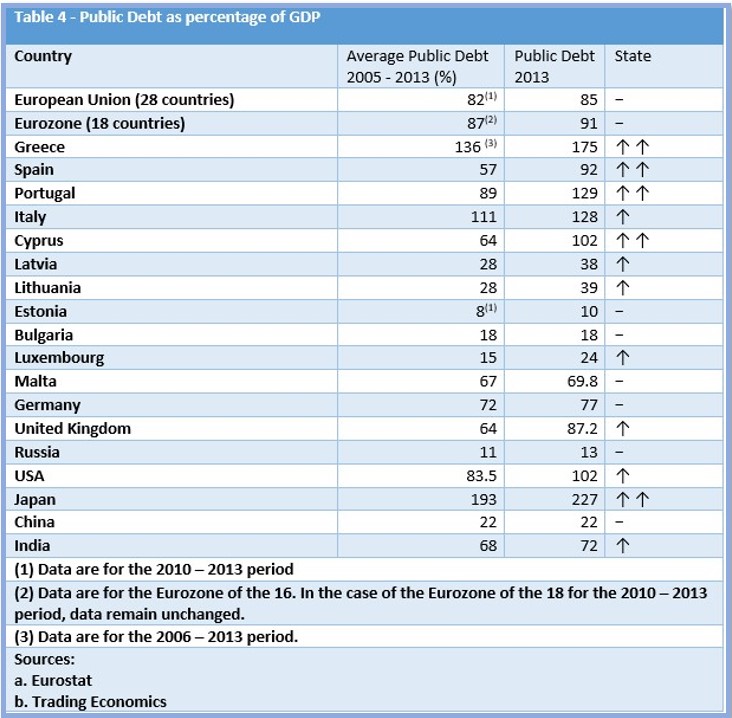 The main social impact of the crisis, however, is the rise of unemployment (Table 5). The marginalization of a significant portion of the working class will contribute, even temporarily, to the reduction of social insurance contributions, thus adding to the retirement crisis issue.

The retirement crisis in Cyprus 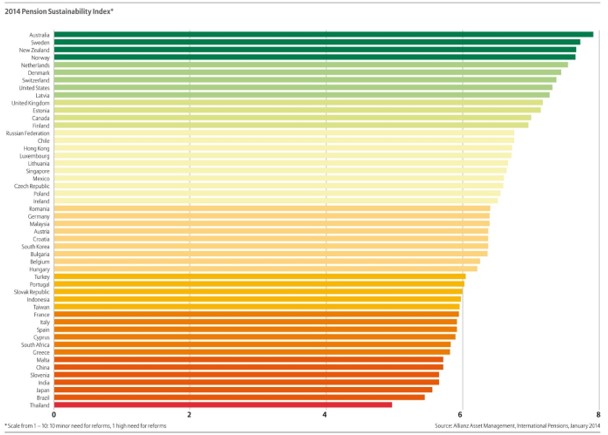 As can be seen, the Scandinavian countries, the USA and the UK have the most stable systems. In contrast, southern European countries are in great need of reform for their pension systems.

A comparison shows that between the average life expectancy in developed countries (78) and the average retirement age (62.5) there are 15.5 years, as Table 6 illustrates. The quickest and easiest way to face the problem is either the increase of retirement age or making its status equal between men and women. 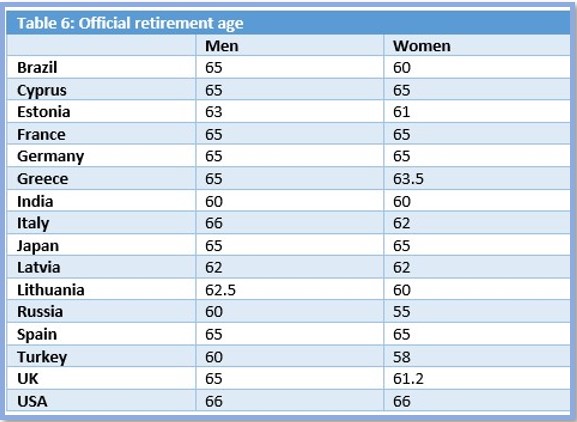 Even though the integration of women into the workforce is on a positive trajectory, in the majority of western world countries it is still far from the equal participation goal. In the European Union in 2014, 63% of women between the ages of 20-64 were part of the workforce compared to 75% for men. That number is not encouraging considering that 34.9% of women work part-time, in contrast to 8.6% of men.

The main reason behind women’s unwillingness to participate in the workforce is the gender pay gap. Specifically for 2014, it is estimated that men earn 16.4% more than women. The country with the biggest pay gap is Estonia with 30%, while the smallest is Slovenia with 2.5%. Cyprus finds itself round the average, with 16.2%. An important role is also played by the lack of infrastructure aimed to protect working mothers. The lack of childcare facilities and all-day schools are the main reason women prefer to stay at home than work.

To solve the issues related to this phenomenon, bold regulations need to be implemented in order to make the participation of women in the workforce easier.

From time to time, governments in countries with low birth rates have used various propaganda methods to convince their citizens to have more children. Some of the attempts resort to extreme promotion measures, reaching a point of identifying fertility with ethnic survival. In reality, the only way to increase birth rates is to provide allowances for large families.

One of the biggest problems faced by the countries of southern Europe is that a large percentage of young skilled workers leave their countries in search of a better life in Western Europe countries. Beyond its enormous productive potential, this workforce could have contributed to the social insurance system.

On the other hand, because of their geographic proximity to North Africa and Middle Eastern countries, these countries take in massive immigration flows. According to researches by the International Business Development Institute, it is expected that by 2050 the workforce in developing countries aged 15-59 will increase by 50%, with China being the sole exception. The inability of these countries to create economic momentum and jobs will lead to a big percentage of the working population to emigrate to the developed world. It has already been calculated in 2010 that 31.4 million people who were not born in the EU now live there. The wave of immigration toward Europe seems to be taking uncontrolled proportions since a significant percentage of that is illegal immigration. Specifically, in 2014, 276 thousand illegal immigrants were registered to enter the EU.  Illegal immigration combined with other structural factors leads us to the conclusion that a significant percentage of foreigners working in the EU is illegal and not registered in the social insurance system. Governments have displayed their inability or even diffidence to effectively face the problem of illegal migration and unemployment. Perhaps the key to the successful solution of this issue is the granting of amnesty and the recognition of those people’s working status, having as an immediate benefit their registration into the social insurance system.

Decreasing unemployment is a key factor to face the retirement crisis. Economic theory suggests two ways by which this could happen – either with the state taking over the role of the employer (Keynesianism or demand-side economics) or through structural changes (supply-side economics). The employer-state can only effectively function in countries with a developed institutional system and a high level of social capital (e.g. Scandinavian and Western Europe countries). In all other cases, the only thing the employer-state can accomplish based on experience is to burden the state budget, retaining a non-meritocratic system of clientelism.

The structural changes include legal regulations that lead to the increase of employment. These regulations can be in the following forms:

Because of their unpopular nature, some of the measures cause social reactions, which is why it is deemed ineffective to apply them in periods of economic recession.

Exempting the big pension funds of banks and semi-government organizations, the pension system in Cyprus is monopolized by the state system of social insurance. This practically means that if the Cypriot state carries out insensible investments, it will jeopardize the sustainability of the pension system. The 2013 financial crisis has called into question the government’s ability to effectively manage official reserves. Social insurances seem more like a punishment rather than a mechanism to ensure pensions, and as a result, a great portion of employers and employees find ways to circumvent them.

The Cypriot government needs to follow the example of other western economies and liberalize the social insurance system, giving workers the right for private choice.